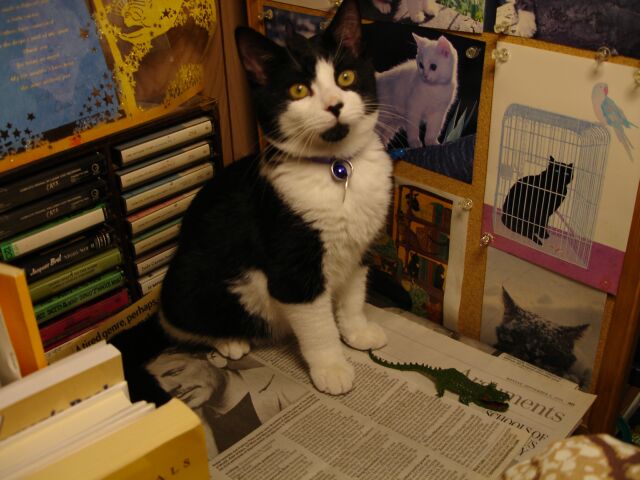 Terzo (the Italian word for "third") was adopted from the Ottawa Humane Society on October 26th 2006. At four months old, he was clearly destined to run Simon Teakettle Ink with a lighter touch.

His tuxedo was accented with white vest, gloves and spats, and his white scarf was a bit askew across his shoulders. A tiny black goatee, black nose, and  light green eyes gave his little face a slightly comical expression.

Although his paw pads were black, one on the left front and two on the left rear were pink, so clearly, whoever wielded the paintbrush in utero had a bit too much bubbly!

Meanwhile, the first two Simons have been written about in Roxanne Snopek's
Great Cat Stories, Incredible Tales About Exceptional Cats, published by Altitude in 2004, and in The Magic of Animals: Living Happier & Healthier with Pets, by Dr. Wendy Di Rodio, published in 2005.

He took over the promotion of MEWSings/Musings, and began a blog on the website.

Most famous for forming the MEWSical Society, he had a great following in his sadly short lifetime.

Here is a portrait drawn by Dianne Oost, imagining all three Simon Teakettles with Bobbi: 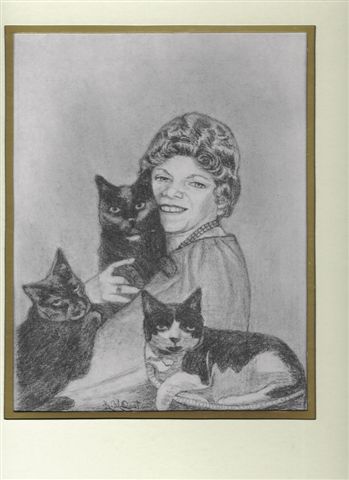 If you're planning to adopt a kitten, please read this first.