This is a page dedicated to the Class of 1956 from Barnard College.

Check out the alumnae pages on the Barnard site as well: our.barnard.edu

Be sure to scroll to the right to see the full photo of those in landscape format.

Classmate photos and information are posted as they are received, so the most recent are at the top of this page. But here's an alphabetical list, so you can scroll down to find anyone you wish.

You can read about me (Bobbi Graham) and see my photos on the Media Room page. 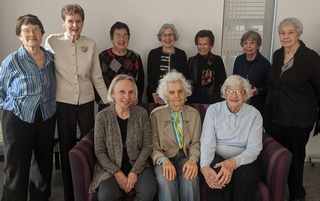 Janet also asked each woman to tell what she's proud of doing or having done, and for a book suggestion. She described the list as  "very eclectic, primarily non-fiction, and not all current." It included Inheritance, by Dani Shapiro, Educated, by Tara Westover. Pogrom: Kishinev and the Tilt of History, by Steven Zipperstein, The Silence of the Girls, by Pat Barker, These Truths, by Jill Lepore, Jefferson’s Three Daughters, by Catherine Kerrison, Last Hope Island, by Lynne Olson, Citizens of London, by Lynne Olson, Alexander Hamilton, by Ron Chernow, The Second Founding, by Eric Foner, and The Circle, by David Eggers. 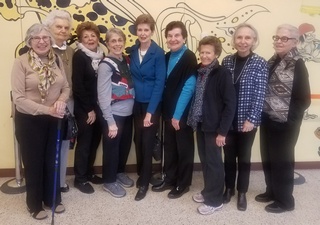 Nine of our classmates attended a mini-reunion on November 16, 2017, visiting the Museum of the City if New York to view After Suffrage: Women in Politics in New York. Janet Bersin Finke reports that it “was a graphic reminder of the great fortitude and dedication of so many women before and after 1917, when it was decreed that females actually had the ability to make political decisions, and cast votes and even (later on) hold office.  The museum is one of the lesser-known treasures of New York. We then had a fine lunch at the adjacent El Café at the Museo del Barrio, where we took a group photo.”

Toni Crowley Coffee sent along this great photo of her family following the wedding of her grand-daughter: 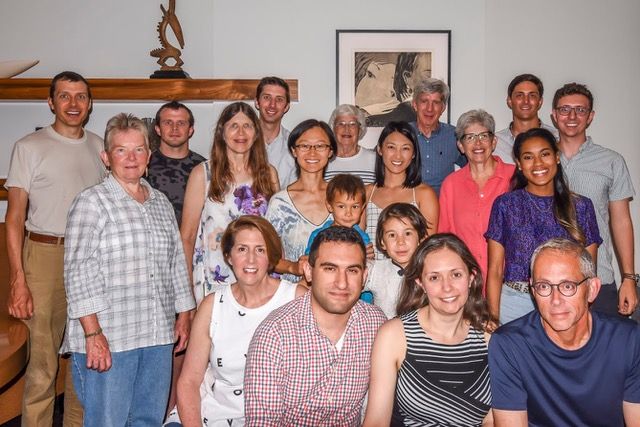 Photos from our 60th Reunion are now moving further down the page,
as we add new  photos at the top.

Toni lives on the Upper West Side of Manhattan, but spends five months or more every year in Oxford, England. Toni and Donn began to spend time in England in the '70s because all her cousins were there. They liked the life there, especially in the spring and summer, and bought a flat. Toni spends more time there since Donn died. Most years she does back and forth three times and stay between six and eight weeks each time.
Toni was involved with the League of Women Voters and was president of the School Board as she raised three children in Port Washington, Long Island. As the children grew, she also worked with Donn in his management consulting business, but chance led her back to Barnard where she became editor of the Alumnae Magazine in 1979.
Eventually she reduced her hours to part-time, becoming associate editor, mainly writing and editing Class Notes and Alumnae Books until retiring in 2002.
About Greek Games: “It's hard for anyone who didn't see it to understand what an amazing event it was. It involved all kinds of skills and talents, athletics, costume design and execution, program design, even management. It brought dorm students and commuters together and since it was a competition between classes we were unified as a class, too. Many of the most active students were commuters. Two of my best friends then -- and still today -- were commuting students. We met the first days of freshman orientation.”
She continues: “Mrs. McIntosh was well known for telling us you can do everything, and that we should not feel we had to choose between career and family. We all knew she and her doctor husband had a large family and, of course, she had a demanding career. We all seemed to hear that she said we could do it all at once although we learned later -- at our 20th Reunion, I think -- that that was not what she meant. We invited her to meet with us one afternoon during the Reunion to talk about life after college.”
One woman said, "You said we could do everything, and we did, but we are tired."
"Oh, no," she said, "I didn't mean all at once. Start on your career, take time off for your family, and go back (to your career)."
Toni continues: “We had not heard it that way! Many of my classmates eventually had interesting careers, but it was a different era. At that time, if you went into publishing, you worked as a secretary or as a researcher and that was it. No one went into finance. Some did go to medical school, and a very few to law school.”
About reunion, Toni says “The best part was seeing classmates -- there were almost 50 of us, which is great considering we're now in our 80s. We once shared an important time of our lives and have lived through the same period of history and that is a powerful bond. As always at a Reunion, we seemed to be able to pick up conversations from five years ago as if we had never been apart.” 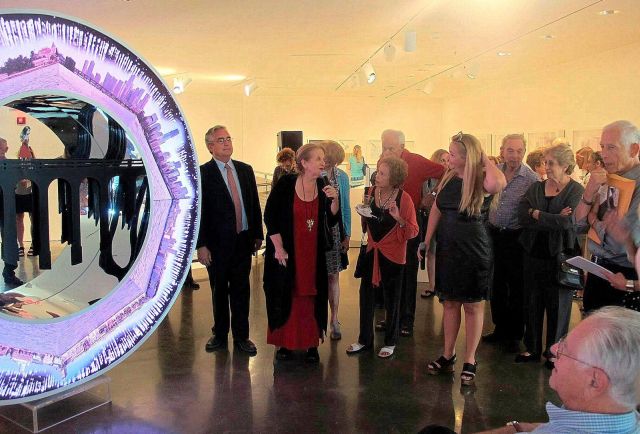 Dianne Woolfe Camber speaking at American University Museum opening of Sandra Ramos exhibition she organized.  Dianne lives in Miami Beach, Florida, and writes about how she first met the artist: "In 2012  met artist Sandra Ramos in Havana and  I suggested to her that her work, while known in the US and abroad,  deserved a major retrospective.designed for US museums and that I would like to curate this..  The exhibition, accompanied by the first English  language catalogue of her work,  opened at the American University Museum September 5th and just ended there but will continue to travel. Her exquisitely rendered autobiographical work in graphics is poignant and exuberantly witty  and her sculpture, painting and video also reflect her craftsmanship. Her work offers a critical feminist perspective on Cuban life post- Revolution.

I had considered including email addresses for classmates featured on this page or in Class Notes,
but was advised that there might be privacy concerns.
If you want your email listed here, so other classmates may contact you, just let me know.

If you want to contact a classmate I've included in Class Notes, just email me and I'll send you the address.

To add a photo to this page, send photos in jpeg format, to BFG @ SimonTeakettle.com, with Barnard in the subject line. Include a brief caption with the location and date. Be sure to identify everyone in a group picture, including first and last names. As time goes on, you can always a newer photo to replace an older one on the site.